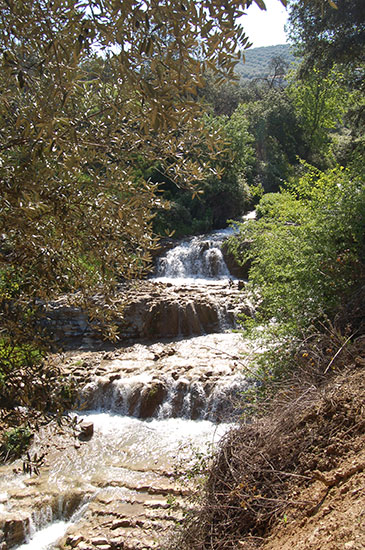 In the foothills of the Sierra de Albayate you start a 45-minute journey that will take you to the spectacular “Salto del Caballo” waterfall, walking parallel to the Caicena River through a cattle trail that coincides with an ancient road from the Roman era. Both from the “Fuente Ribera” Historical Museum and from the “La Veguilla” Bridge, located on the Ctra. Almedinilla to Bracana , part of the trail, 1.4 km away, leads to the “Salto del Horse”.

This road makes you go through the ruins of the different flour mills (from the 19th century) that moved the force of the river (of which the existing in the Historical Museum is a good example), mills of Tower or Cubo of which there were up to 10 throughout the Caicena channel. In addition, you can contemplate the vegetation of the Mediterranean forest: holm oak oaks, olive trees, almonds … shrubs such as broom, gayomba … or plants such as thyme, lavender, horehound, pennyroyal, fennel … (Many of them with medicinal and culinary use).

At the end of the tour, you will find different pools and waterfalls for bathing in the river, waterfalls that have their maximum expression in the “Salto del Caballo”. Above this cascade (next to the road) was documented by the Historical Museum of Almedinilla 5 tombs of incineration. People, that like the Iberians (whose reflection is magnificent example the town of Cerro de la Cruz), they should have this waterfall as a sacred place populated by nymphs: the goddesses of the waters.

Relax and enjoy the smells, the colors and the sound of the water respecting the environment.