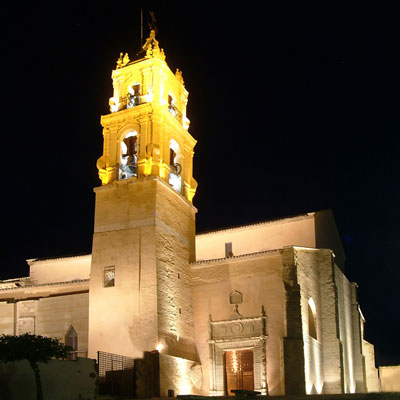 The first news of this temple, located in the highest part of the city, dates back to the 13th century. Due to its location, its importance in the town and its mention in documents of the time, it is believed that it could occupy the site of a mosque; in fact, the tower that still exists seems to be a Muslim minaret dating back to the 9th century, although over time it has undergone logical transformations, among which we must mention the bell tower itself, which is a Baroque work.

Its floor plan has three naves, without a transept and separated by pointed arches that rest on Gothic pillars, typical of 16th century Cordovan architecture. There are two doors to the exterior, that of the Angel and that of Forgiveness. The first, named after the monument to San Rafael that appears in front of it, stands out for its concave and convex grid decoration on jambs and lintel, typical of Cordovan architecture; the Puerta del Perdón is in the Plateresque style, dating from the end of the 17th century and the beginning of the 18th century.

One of the most precious and still preserved works of art in the church is the great gate that, before the restoration carried out in 2003, closed the Main Chapel.

The gate is located at the foot of the main nave, next to the new arch. It is in the Plateresque style, mid-16th century, which due to its crepe, its embossed friezes and the way in which its elements are distributed, belongs to the Andalusian grills that followed the canons of the master Bartolomé de Jaén. It is undoubtedly one of the most important bars in the province of Córdoba and is at the same level as those existing in the most renowned cathedral temples. On the other hand, other jewels of great artistic value that we can admire in this church are the Custody from the 18th century, made of embossed and gilded silver; and the image of the Virgen de la Antigua, in the Gothic style and sculpted in stone.