Fortress of the Christian Monarchs 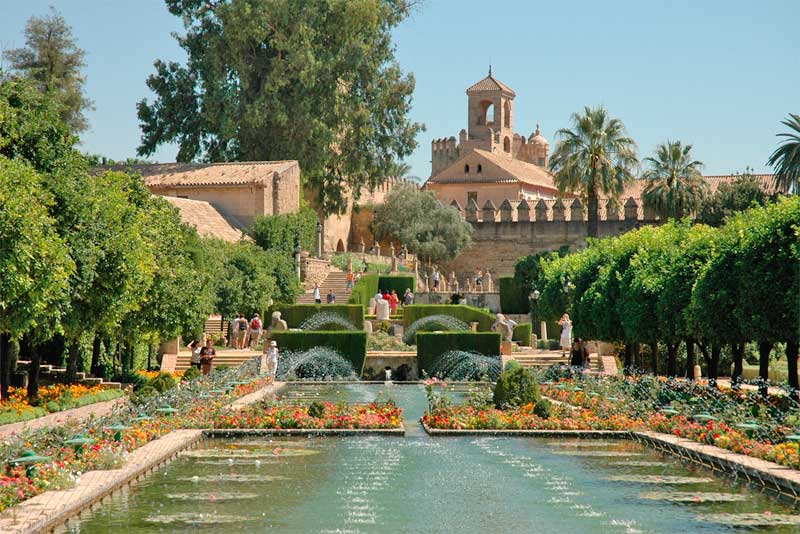 The Fortress of the Christian Monarchs is a thick-walled palace-fortress which reflects Córdoba’s changing architectural style over the centuries. Roman and Visigoth ruins stand side by side with Arab remains in this imposing site, which was the favoured retreat of many different rulers of the city, once forming a wing of the Caliph’s Palace. After the conquest of Córdoba by Fernando III el Santo in 1236, the building fell to ruins and the rebuilding process began in the reign of Alfonso X the Wise and was completed during the reign of Alfonso XI. Throughout its varied history, the building has seen numerous uses, from the headquarters of the Spanish Inquisition to an early 19th century prison.

At first glance, the fortress surprises visitors with its almost rectangular construction and long stretches of stone walls with towers at each corner (named The Tower of the Lions, the Keep, the Tower of the Inquisition and the Tower of the Doves). The inner chambers are arranged around courtyards with attractive flowering plants and shrubs, aromatic herbs and shade-giving trees. The different halls and corridors feature Gothic stone vaulting.

In one of the main passageways lies an early 3rd century AD Roman sarcophagus, with an allegorical scene sculpted in high relief showing the dead passing to the afterlife through a half-open door.

The finest room is arguably a small baroque chapel known as the Mosaic Hall, which features a number of splendid Roman mosaics unearthed during building works in the Corredera Square. Beneath this room are the Arab-style baths, which consist of three vaulted chambers with star-shaped skylights, to which steam was supplied by a boiler situated below the keep.

There are two main courtyards, of which the Mudejar Courtyard is the most attractive: the marble flooring, together with the gentle sound of water running through the channels into the pools, provide the foot-weary visitor with a cool, relaxing refuge on hot summer afternoons. The extensive gardens at the back reflect the importance and grandeur of this impressive fortress.

INFORMATION AND SALE OF TICKETS:

For night-time visits: see the show ‘Córdoba, the Light of Cultures’ – A water, light and sound show at the Fortress of the Christian Monarchs