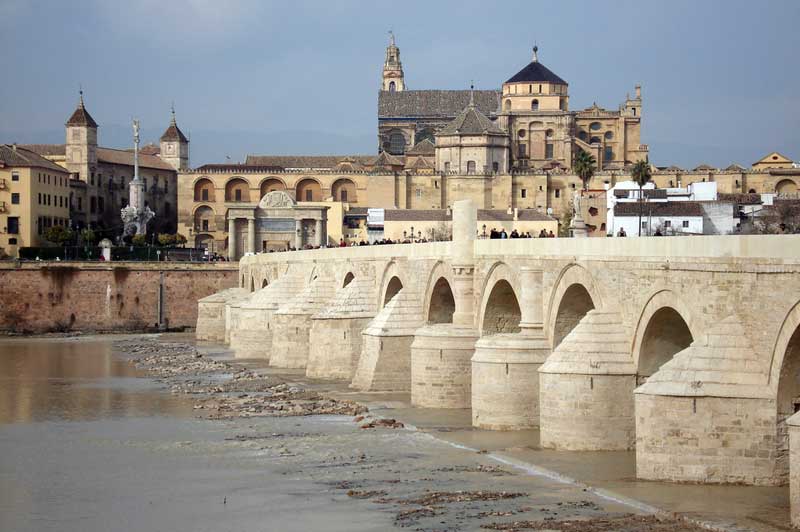 Built in the early 1st century AD, with Córdoba under Roman rule, the bridge spans the Guadalquivir river with 16 arches, comprising a total length of 331 metres. As the only crossing point over the river which did not require a boat, it remained for many centuries the main entrance to the city from the south of the Iberian Peninsula.

Together with the Archway to the Bridge, the Calahorra Tower and the riverside walkway known the ‘Ribera’, the bridge is one of the most emblematic images of the city and there is a stunning panoramic view from the south bank of the river.

The bridge has been remodelled countless times over its history, and its current appearance is the result of the conservation and rebuilding work carried out by architect Juan Cuenca Montilla between 2006 and 2008. As part of the work, the cutwaters at the base of the piers were cleaned, the original stones uncovered and the cobbled paving stones replaced by smooth half-polished granite slabs. In addition, the 19th Century lampposts were replaced by functional street-level illumination and the old saints’ niche dedicated to San Acisclo and Santa Victoria was restored. The north end of the bridge was also cleared to the same level as the Archway to the Bridge and the Ribera river walkway. At the central point of the bridge stands a triumphal column of St. Raphael, dating from 1651, the work of sculptor Bernabé Gómez del Río.