The walls, of which canvases, fortification buckets and arches of Roman foundations are still preserved, they cover a perimeter of about 2400 metres and surround  San Juan medieval quarter. They had main doors of which three are conserved: the Arco de la Rosa (or Puerta de Sevilla), the Puerta de Morón (or Castillo de San Pedro), the Puerta de Carmona in the Ronda de la Alcazaba and the Portillo.  Osuna’s  and Ecija’s Gate have disappeared, and other secondary

The Arco de la Rosa is formed by a horseshoe arch and defended by two bastions of Almohad origin. After the conquest, the enclosure was almost abandoned. However, for the purposes of the Bull of Pope Martin V, this gate and some towers were rebuilt, and the works were completed in 1430. In memory of the event the coat of arms of the Pope was placed on it, on which appears a column (emblem of the Colonna, family to which the Pontiff belonged), under the globe and the keys. 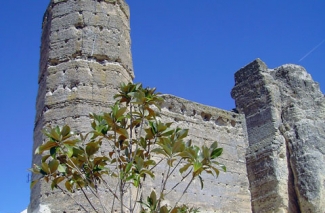 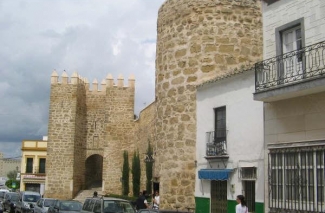 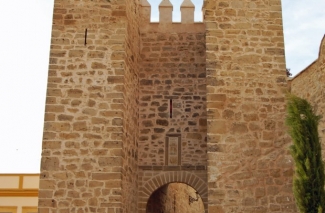