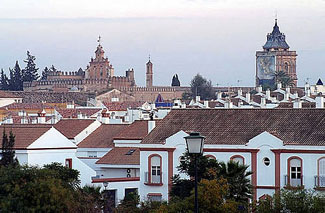 A t the beginning of the Ruta de la Plata, in the aljarafe region, and only seven kilometers from Seville, it’s found Santiponce. A quiet village, without traffic jams or rush, which has managed to preserve the rural charm typical of the small sevillian villages, , which sets him apart from other neighboring populations trapped by the capital’s expansionism.

Its eight square kilometers of extension concentrate one of the richest cultural heritages of Andalusia, since in them is Itálica, the first city that the Romans founded outside the Italian peninsula and San Isidoro del Campo, Cistercian monastery which preserves important historical and artistic treasures.

The quiet of its streets, the hospitality of its peoples, his rich gastronomy and crafts, along with the important cultural legacy it possesses, they make Santiponce a destination capable of satisfying the concerns of every lover of rest, history and art.