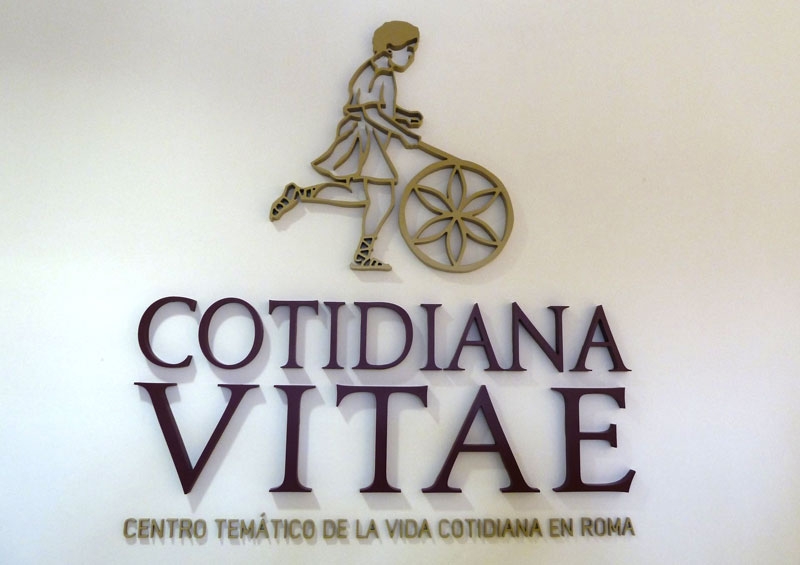 The “Cotidiana Vitae” Thematic Center is a municipal facility that recreates daily life in ancient Rome. The visit will allow you to travel to the 2nd century AD and stroll through different public and private spaces of a Roman city. The building consists of two floors, on the first floor we find the public spaces (“taberna” or shop, “thermae” or public baths) and on the second floor the private spaces of a “domus” or single-family house.

The visit to Cotidiana Vitae (always guided) begins with some explanatory panels that place us in the area of the Roman province of Bética, later approaches the area of the old “ConventusHispalensis”, and finally take us to the city of Itálica in the Roman Imperial period.

The visit continues with a tour of public spaces: a Roman street from the antic period with its stalls, an open-air school, a tavern and the hot springs, in which the virtual tour is recreated by the audio visual means “The Roman Baths”(First prize in the virtual heritage category, in the VIII International Digital Animation contest, SICARM 2011 in Murcia). Then, you go up to the first floor (there is access for people with disabilities), where a dome /a Roman single-family house is authentically recreated; first you visit the patio (“atrium”) around whichthe main rooms are distributed: kitchen, bedroom (“cubiculum”) and dining room (“triclinium”) where the visit ends.

Furthermore, the Cotidiana VitaeCenter has an extensive program of activities available to school groups, which include visiting the Center, as well as didactic workshops on various aspects of daily life in the antic Roman world. Activities for arranged groups and school groups can be complemented by a guided visit to other local monuments, such as the Archaeological Ensemble of Itálica or the Monumental Enclave of San Isidoro del Campo.