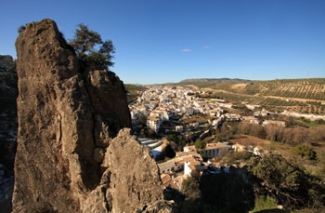 Almedinilla, to the south of the province of Córdoba, is a lively and dynamic town in which the white of its houses, mixed with the rock of its mountain range, is confused with the green of its olive grove, inviting you to a walk in time.

To speak of Almedinilla is to talk about archeology, culture, heritage, just as its important archaeological sites do: the Roman Villa “El Ruedo” (Declared BIC), one of the most important areas of the Peninsula; the Iberian Settlement “Cerro de la Cruz” also declared BIC, one of the few of Iberian Low-Age excavated in Andalusia and its Historical-Archaeological Museum that contains the extraordinary pieces that are contributing these sites, highlighting the Iberian ceramics and the sculptural set of our Roman villa, reigning over all of them the Greco-Roman god of the dream: Hypnos or Somnus, whose state makes it the most important of the few conserved in the world.