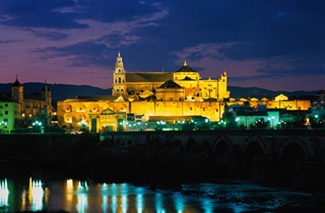 C órdoba is one of the eight provinces which make up the Autonomous Community of Andalusia. Its surface area of ​​13,723.20 km² makes it the second largest province in Andalusia and the thirteenth largest in Spain. The Guadalquivir River runs through its lands from east to west and divides it into two almost symmetrical regions.

The area to the north of the river includes the mountain range of Sierra Morena sloping down to the valley of the Guadalquivir, which are mainly used for extensive livestock farming. The lands south of the river are known as the Campiña, with rich, fertile soils which are ideal for agriculture, stretching south-west to the city of Seville. In the southernmost part of the province lies the area known as the Penibética, with its abundant vines and olive groves.

The exact historical origins of Córdoba are uncertain. Its location by the river and the fertile fields around naturally made it an ideal place for the first prehistoric settlers, who first appeared in the late Bronze Age (9th – 8th centuries B.C.). A few centuries later, after the arrival of Phoenicians and Greeks on the peninsula, the city became a major mining and trading centre as it was accessible by boat down the River Guadalquivir. This broadened the city’s horizons and favoured the spread of goods and artwork between Cordoba and all the major cities of that period.

Córdoba has been awarded four Inscriptions on the UNESCO World Heritage List: The Mosque (1984), the Historic Quarter (1994), the Courtyards (Patios) Festival as Intangible Cultural Heritage of Humanity (2012) and the Caliphate City of Medina Azahara (2018). As a result, Córdoba is the European city with the most UNESCO inscriptions, and is second in the world only to Beijing.